In Loving Memory of Hank the Tank 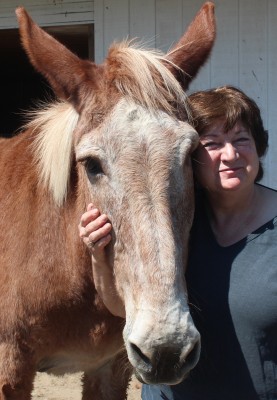 I lost a big piece of my heart on Friday, when one of our beloved mules, Hank the Tank passed away. We never knew exactly how old Hank was, but our veterinarian, Kraig Kulikowski, who specializes in equine dentistry said that he believed Hank was somewhere between 33 and 35 years old. Everyone here at Equine Advocates is taking Hank’s loss very hard. He was adored and loved by all of us.

In the fall of 1999, I went to New Holland, the slaughter auction in Lancaster County, PA for a special Mule Sale where 500 of them were going on the auction block that day. The most I could afford was to save was seven and Hank was one of them. All had been Amish Work Mules who were being scrapped for slaughter or sold to other Amish farmers to work some more and then eventually end back up at New Holland when they could no longer perform.

I named him Hank the Tank because of his strong personality. He was extremely willful. Hank did not like to be confined, so if you locked him in a stall and he wanted out, he would just break the door down. He was also very difficult to handle at first and it was especially hard to trim his feet. We have found that to be the case with many Amish Work Horses, Mules and Buggy Horses we’ve rescued over the years because of the way they were handled and treated.

However, with lots of TLC, Hank became more trusting to the point where I was able to ride him on trails. He was one of the sweetest and most wonderful equines I had ever been around. He and I had a special bond and when we established our sanctuary in 2004, Hank was among the first group of equines to come here. Prior to that, all of the horses we rescued were being kept in boarding facilities and foster homes.

Hank continued to live up to his name when he began to be affected by various health issues as he grew older. I say that as a great compliment because he really was a “tank.” His courage and stoicism were amazing because he simply refused to give in to any of those problems. When he lost an eye to a painful ulcer, he overcame it and did fine with one eye. When he developed osteoarthritis in his right hip that affected the way he walked, that barely slowed him down. When his teeth were no longer functioning properly due to age and had to eat mashes, he continued to do well on that regimen. As he could no longer chew carrots or eat apples due to his teeth, I would prepare a special concoction for him which I called, “Hank’s Mixture,’ a combination of liquefied apples, carrots, bananas, coconut oil, ground flax seed and molasses which was added to each of the four mashes he ate every day.

Hank loved his freedom, to be with his herd and live life on his own terms. He did that to the very end. His life is an inspiration to us all because he lived it to the fullest. He taught me that being tenacious and not giving in to difficulties is the greatest attribute one can have.

I will miss Hank every day. He will also be missed by those who knew him best on our Board, our entire staff, our vets and many of our friends and volunteers. He affected us all and we will never forget him. 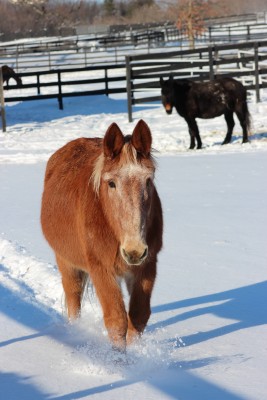 Your gift supports our equine residents.

*Make a One-Time donation below, or click to make a Monthly Donation